Time of Death: Some Patients Prefer to Die Alone

A little over a year ago I wrote a Pallimed article called, "We Don't Know Death: 7 Assumptions We Make about the Dying."  Having knowledge of our assumptions is a first step, but what do we do with that knowledge?  Since I wrote that article, I have further contemplated the “so what” factor of the assumptions to develop suggested interventions.

This article is the fourth in a series of articles where I will take each assumption from the original article and explore the concept in greater depth to include implications and possible interventions.  In my last article, I wrote about the assumption Family will want to be with their loved one when they are dying.

Here is our next assumption: People don’t want to be alone when they die.

This may be an unpopular assertion within my own hospice industry for me to advocate for leaving a patient alone sometimes. Hospices have entire programs devoted to assuring patients and families that they will not ever be alone. Many of them are actually called, “No one dies alone” or NODA. The perhaps unintended consequences of the marketing of these programs is the programs may perpetuate the myth for the public that nobody ever wants to die alone.

For the family member who has minimal prior direct experience of being with a loved one as they die, this assumption that dying patients shouldn’t ever have to be alone can create intense anxiety. Family members will sit vigil for days without eating or sleeping. Hospice professionals may inform the family they can take a break, but this can be a confusing mixed message. Hospice has a program that says that no one should have to die alone, and yet this hospice nurse is telling me to take a break?

Some patients want to die when no one else is there. 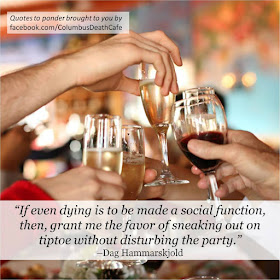 Hospice professionals know that companionship while dying is a personal preference. We have those patients who die in the middle of the night. We hear stories about the loved one who just stepped out for five minutes and the patient died. We may have even witnessed a quick death ourselves. I believe this happens by the patient's choice.

Secondary assumption: Patient will want family member by their bedside when they die

When my mom was on hospice and they said her death was close, I sat vigil with my mom throughout the night, sleeping in an uncomfortable recliner. I finally went home to take a shower and mom died when I was 10 minutes away from returning to the facility. I was racked with guilt. Years later when I was working in hospice, I reconciled what had happened after I observed many deaths where patient died after family stepped out.

It seems to happen most often when the patient is a parent. I believe it is a protective factor.

A patient might die when their loved one steps out of the room for just a minute or right before they arrive. It is gut wrenching for the family member if they’re not prepared for this possibility.

Suggested Intervention: Educate family prior to when patient is actively dying that the patient may purposefully die when family is not present.

If you have this conversation while the death is not imminent, you will have a better chance of the family member absorbing what you are telling them. I believe this conversation helps with bereavement as well. When I have prepared a family member ahead of time of the possibility that they will not be present at time of death, and the death happens in their absence, they usually say to me that they understand why. They will say, “He couldn’t bear to leave while I was sitting there. When I left his side, he knew that I would be okay and he could go.”

Before I started having these preparatory conversations, I noticed that the bereaved family members always had strong feelings of guilt for “not being there” when the patient died. They felt their physical absence was somehow a metaphorical representation that they were not emotionally there for the patient. They believe they failed the patient. This rarely is the case, but guilt is a difficult feeling to alleviate. Loved ones can harbor this self-imposed guilt for years after the death.

Suggested Intervention: Encourage family to have an open conversation with patient about the topic (if this is in line with patient and family communication style and cultural beliefs.) 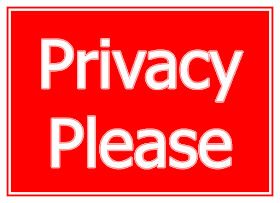 This conversation would perhaps give the patient the opportunity to let the family member know they are uncomfortable with the family member being present when they die. This may be too direct of a conversation between family and patient, so you really have to read whether they would be open to the discussion. A patient may worry that the family member would feel hurt by their choice, so they might not be able to articulate their preference.  They also may not know what they would want, because imagining the moment of death might be too scary.

As hospice professionals, we can advise and facilitate, but ultimately, family dynamics are enduring throughout a lifetime. (This will be covered in a future article).

When I was a volunteer, one time I was asked to sit vigil with a patient to relieve the family. But when I got there, the patient’s wife and daughter were so nervous about leaving that they stayed too. They asked why it was taking so long for their loved one to die. I explained the idea that sometimes a patient can’t or won’t die while family is present. They seemed to understand the conversation and eventually left. The following day, I went to visit again, but as it turned out, the patient had died when I was en route, and the hospice office did not have a chance to contact me.  When I arrived, one of the patient’s daughters pulled me aside and told me that she listened to what I had said the day before and wanted to tell me what had happened with his death. She said when the nurse told her it was going to be soon, she called her mom and sister. She leaned forward and said to her non-responsive father, “Dad, they’re coming. You and I both know that I’m the only one who can handle this, so if you’re going to go, you better go now.” He died within 5 minutes, before his wife and daughter arrived.

I believe that everything happens for a reason, and I was not informed of his death so that I could arrive to the facility for the daughter to tell me her story.

There was another patient with whom I had an open discussion upon our initial meeting. She was a mother and she told me she did not want her children to see her suffer. It was an offhand comment that was illustrated by her death five days later. Her daughter was present at the home and the nurse told the daughter that the patient would be dying soon. The daughter stepped out of the room to call her siblings and in that moment, the patient took her last breath. The adult children all arrived within minutes only to find they hadn’t made it in time. As we waited for the funeral home, the family talked about the patient’s strong independent nature. I informed them that her mother had told me that she did not want them to see her “suffer” and that I believe she chose to go before they arrived. There was a moment of levity for them as they laughed and agreed that it would be just like her to do what she did. They were still mourning her absence, of course, but they admitted that they were comforted by believing their mom was protecting them by dying before they arrived.

These are just a few examples of the times in which I have observed patients choosing to die in a loved one’s absence. As with the other assumptions articles, the purpose of this article is to bring to light some hidden assumptions that we or our family members may have, and identify how we may best support them in their journey.

Lizzy Miles, MA, MSW, LSW is a hospice social worker in Columbus, Ohio and author of a book of happy hospice stories: Somewhere In Between: The Hokey Pokey, Chocolate Cake and the Shared Death Experience. Lizzy is best known for bringing the Death Cafe concept to the United States. You can find her on Twitter @LizzyMiles_MSW

Note: To continue reading the assumption articles, the next one in the series is: When Dying Isn't Enough for Family to Forgive