Don't ask a dying man if he wants bacon or sausage 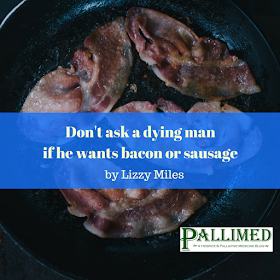 It has been four years since I first wrote the article “We Don’t Know Death: 7 Assumptions We Make about the Dying” for Pallimed. You would think that with four more years of experience I would feel more confident in my knowledge about my job and my patients. I don’t.

In fact, I’m still uncovering assumptions that I make when working with patients who are dying.

Recently, I discovered Assumption #8: Dying patients want to be in control.

I had so many reasons and examples to believe this, from the very beginning of my hospice work. I came to this conclusion after just a short time volunteering. One of the hospice patients I visited would have me adjust the height of her socks continuously for ten to fifteen minutes. At first I didn’t understand and I thought to myself that she must be a little obsessive. Then I had this a-ha moment.

This assumption held up for a while. I would have frustrated caregivers who would tell me that their dying loved one was impossible and demanding over little stuff: the lights in the room, the arrangement of the drapes. These caregivers would be exasperated. I would validate their feelings of frustration, but also encourage them to empathize. I’d tell them that it’s tough to be dying. The dying need to control what they can. Often this worked to provide some relief to the caregiver, if only briefly.

Slowly, though, my solid belief in the dying person’s desire for control began to unravel. True, there are some patients who still very much want to be in control…but not everybody.

Everything came to a head when I met “John.” I asked him the dignity question, like I always do. He scowled at me. 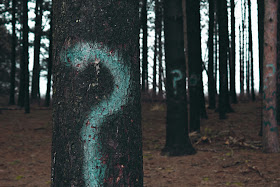 Later that day, his wife (I’ll call her “Sally”) came into the inpatient unit, and I returned to the room to meet her.  We sat on the couch across the room while John was finishing a visit with a Pastor. Sally talked about how sweet John used to be. She said lately though he had been taking his anger out on her. We had moved to his bedside when Sally said to me, “All I ask is whether he wants bacon or sausage and he yells at me.”

At this point, John rolled his eyes.

I looked at him, and then after reviewing our first interaction in my head, it dawned on me. He is overwhelmed. Unlike other patients who want to control every little thing, John was irritated by the decisions he had to make. I turned to Sally and said, “I know you are trying to please him and give him what he wants, but right now, he has the weight of the world on his shoulders. The act of deciding whether he wants bacon or sausage is so insignificant to him right now.”

I looked over and John was nodding vigorously. Sally was listening intently. “But what do I do? I want to make things easier for him.”

Side note: Surprisingly, we can learn things from television medical dramas. I had been watching The Good Doctor and there had recently been an episode about how a doctor with Asperger’s was irritated with being asked questions. Another doctor realized that giving him statements, rather than questions, are better.

So I suggested to Sally. “Don’t ask him whether he wants bacon or sausage. You pick what you’re making and tell him, ‘I’m going to make you bacon and eggs.’ If he doesn’t want that, he will let you know.

John nodded vigorously again and said emphatically, “Oh yeah I would.” Both were smiling. We were then able to move on to life review and by the end of the visit, the grumpy patient was calling me “Darling.”

So how do you navigate learning and understanding patient preferences to have control or give up control? They aren’t always able to tell you but it's not hard to figure out if you're looking for it. Generally, I would say to start with the premise (okay yes, assumption) that they do want to feel in control.


For the patient who wants control:

For the patient who is tired of decisions:


Lizzy Miles, MA, MSW, LSW is a hospice social worker in Columbus, Ohio and author of a book of happy hospice stories: Somewhere In Between: The Hokey Pokey, Chocolate Cake and the Shared Death Experience. Lizzy is best known for bringing the Death Cafe concept to the United States. You can find her on Twitter @LizzyMiles_MSW