Does Colace (docusate) Work For Constipation? No! 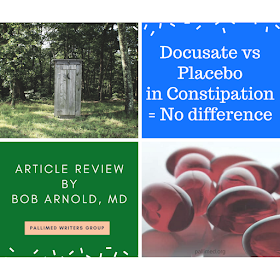 (This is the first post from the Pallimed Writers Group, a growing group of nearly 20 clinicians who are reviewing landmark studies and important current research. This study was highlighted in the GeriPal Top 25 articles in HPM.- Ed.)

Palliative care fellows may wonder about their attendings fixation on bowel movements. It may be because we do not ask medical students to disimpact patients any more or because, given the lack of ambulatory care many residents do, they do not see it as a big deal (Constipation a GREAT topic for those of us who like puns and dad jokes).

For patients, however, constipation is a topic they think about many times a day. It is very common (39-70% prevalence) in patients with cancer or other serious illness, particularly in elderly patients. The prevalence goes up to 80% in patients on opiates and for many of my patients, the bloating, nausea and discomfort associated with opiates are worse than the pain we are treating.

At the hospital where I work, Colace (docusate) is often used as the first treatment of constipation and/or as the drug of choice to prevent constipation. This has been despite a lack of evidence (JPSM 2000:19:130-6). I was thrilled to see this RCT of docusate and sennosides vs placebo and sennosides looking at whether docusate improved stool frequency, volume, and consistency. They found no difference in any of these variables.

1) Are the results valid?
a. Was the assignment of patients to treatment randomized? Yes
b. Were all patients who entered the trial properly accounted for and attributed for at the conclusion? Yes (and I wish I would have gotten more information.) Of the 1426 patients who were screened, only 305 met the study criteria and 80 consented. More data about why so many patients did not meet the study criteria or how the 26% who consented differed from non-consenters would be nice. Once we got to the 80 patients, the information and follow up is great (although only 73% completed the ten-day study.)
c. Were patients, clinicians and study personnel ‘blind’ to treatment? Yes (although I would like it better if they asked patients if they got the placebo or the active drug to make sure the blinding worked.)
d. Were the groups similar at the start of the trial? Yes; moreover, their OME, and use of other drugs were similar enough to be comfortable with the groups equivalency. It might have been nice to know how physically active both groups were and if they were from the same hospices, but now I am being a pain in the ass.
e. Aside from the Experimental Intervention, Were the Groups Treated Equally? Yes.

2) What Are the Results?
a. How Large Was the Treatment Effect? This was impressive. They looked at bowel movements every which way and found NO DIFFERENCE. They looked at frequency, volume, difficulty of defecation, and symptoms of constipation. There were differences in consistency (thankfully no pictures) but this was not consistent.
b. How Precise Was the Estimate of the Treatment Effect? I have no worries about this. I might have chosen constipation symptoms as the primary outcome (and this would have required a different sample size). Given the consistency (UGH) of the findings, this does not seem to be a problem.

3) Will the Results Help Me in Caring for My Patients?
a. Can the Results Be Applied to My Patient Care? This patient population is sicker and has more cancer than my patients. The patients were all recruited from an in-patient hospice unit where the median LOS was 16 days and 97% died during their stay. Moreover, the study population changed in the middle of the project (from requiring the patient be on opiates and have cancer) which should always make a reviewer nervous. This is going to be biggest question for many of you (although there is no reason to think that non-cancer, less sick patients will have different findings).
b. Were All Clinically Important Outcomes Considered? Yes. I think this is a strength of the study.
c. Are the Likely Treatment Benefits Worth the Potential Harm and Costs? Someone might say – who gives a shit? Docusate is cheap as stink (in my hospital taking it off the formulary would save less than 1000 dollars a year). And the pill does not taste as nasty as the liquid formulation (see GeriPal’s excellent laxative taste test) and is just one pill (not even that if it is given as a combination with senna).
I still hate docusate because clinicians think they are doing something when they are not. In my hospitals, the house staff think when they are giving docusate for patients on opiates they are doing something and thus DO NOT USE ANOTHER (EFFECTIVE) LAXATIVE. This study is worth reading and quoting so people start off using the right drugs rather than letting patients get constipating and then chasing their tail.

Robert Arnold MD is a palliative care doctor at the University of Pittsburgh and a co-founder of VitalTalk. He loves both high and low brow comedy (The Good Place and Nanette), pop culture (the National Enquirer and Pop Culture Happy hour) and music of all kinds (not opera tho!)
Pallimed Editor at 7:00 AM
Share
‹
›
Home
View web version